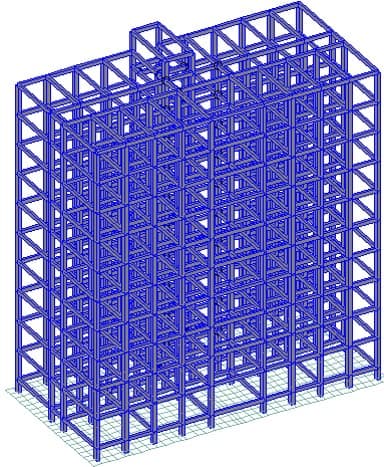 Seminar on Building Analysis on Staad with Raft Foundations –

STAAD has a facility for automatic generation of spring supports specified under the SUPPORT command.The modulus of subgrade reaction constant k for each soil type is taken as 10,000 kN/m3, 45,000 kN/m3, and 95,000 kN/m3, representing soft, medium, and stiff soil, respectively

Calculation of base shear is carried out for structure located in seismic zone IV.

It has been observed that the stiff stratum at the base does not change the design forces significantly. The bending moments at the base of the columns under gravity loadings show a greater increase for soft soils as compared to the medium and soft soil. As the stiffness of the soil strata increased, structure behavior became closer to that observed for rigid supports.

Abrupt change in bending moments at the base for foundations on softer soils. Generally this portion of the structure is not given consideration in most of the practical designs which are based on the assumption of rigid support system.

More BM in members due to differential settlement in soft soils.

The soil structure interaction must be considered in the design of structures. At the design stage, specific effort must be made to find the realistic value of modulus of subgrade reaction depending on the type of soil, so that we can get the exact design forces for optimum design solution.