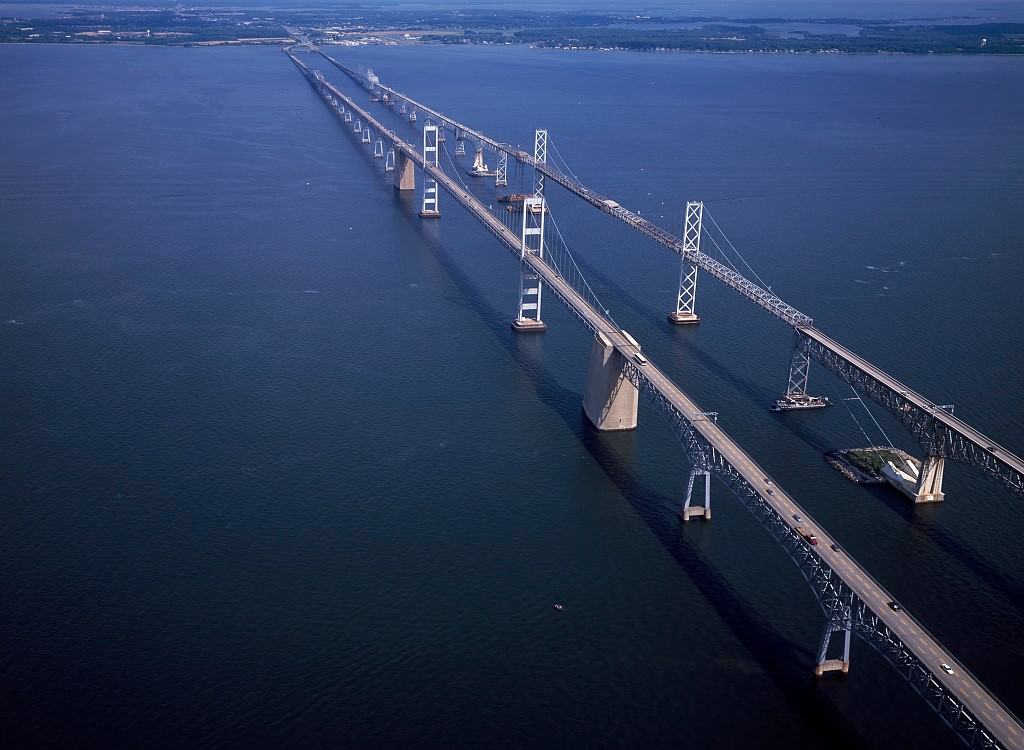 The Chesapeake Bay Bridge (commonly known as the Bay Bridge) is a major dual-span bridge in the U.S. state of Maryland. Spanning the Chesapeake Bay, it connects the state’s rural Eastern Shore region with the more urban Western Shore. The original span opened in 1952 and, at the time, with a length of 4.3 miles (6.9 km), it was the world’s longest continuous over-water steel structure. The parallel span was added in 1973. Officially, the bridge is named the William Preston Lane, Jr. Memorial Bridge after William Preston Lane, Jr. who, as governor of Maryland, initiated its construction.

With shore-to-shore lengths of 4.33 and 4.35 miles (6.97 and 7.00 km), the two spans of the bridge form the longest fixed water crossing in Maryland and are also among the world’s longest over-water structures. The bridge’s western terminus is in Sandy Point State Park, located northeast of Annapolis in Anne Arundel County, and its eastern terminus is in Stevensville on Kent Island in Queen Anne’s County.Structural details With the exception of the number of lanes on each (two on the original span and three on the newer span) and differences owing to the design standards for the periods in which they were built, the spans are structurally similar. Both were designed by J. E. Greiner Co., now a part of URS Corporation. Each span features:

Two main spans over the bay’s two shipping channels:
A 3,200-foot (975 m) suspension span over the western channel with a maximum clearance of 186 feet (56.7 m)— high enough to accommodate ocean-going vessels and tall ships
A through-truss cantilever span over the eastern channel with a maximum clearance of 58 feet (17.7 m)
Deck truss and steel girder spans flanking the main spans
Concrete beam spans on the portions closest to the shores
A curve near the western terminus, which is required so that the main spans cross the bay’s shipping channels at 90 degrees per United States Army Corps of Engineers requirements