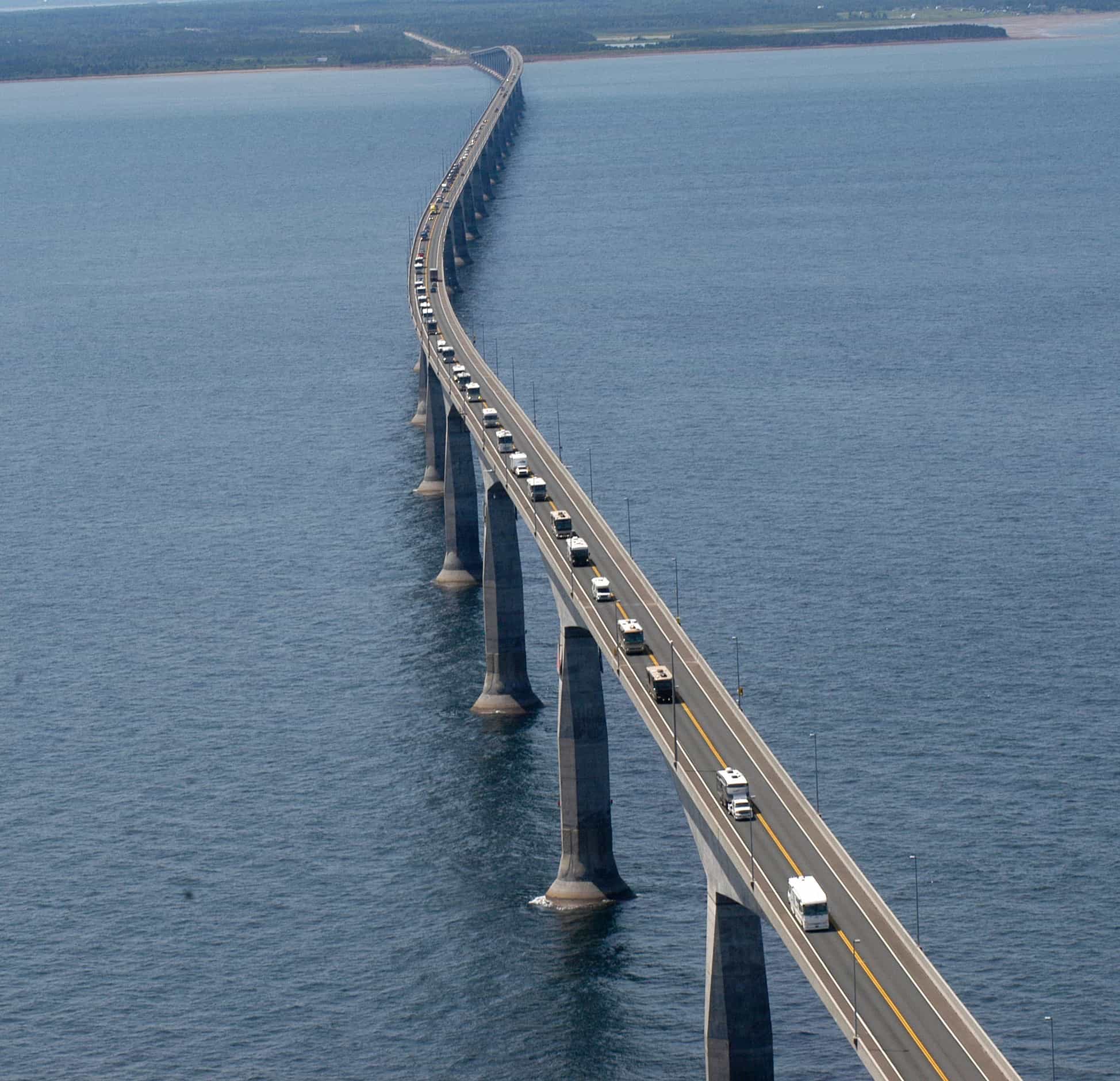 The Confederation Bridge, Canada – Longest Bridges in the World

“The longest bridge in the world over ice-forming waters.”

At 12.9 km in length, the Confederation Bridge is the world’s longest bridge over ice covered waters. It is a multi span post tensioned concrete box girder structure which carries the two lane Trans Canada Highway between Prince Edward Island and New Brunswick.

Various proposals for a fixed link across the Northumberland Strait can be traced as far back as the 1870s when the province’s railway system was developed. Indeed the first President of the original Canadian Society of Civil Engineers mentioned a proposed link in his first Presidential speech 1888 although at that time it was not a bridge that was proposed. Referring to projected works he noted “The tunnel or subway to give railway connection with Prince Edward Island is another of the great Engineering works proposed. It is difficult at present to say whether the physical or the financial obstacles are the greatest, but when the money is forthcoming I have no doubt that a way will be found to reach the island”.

Subsequent proposals arose during federal elections in the late 1950s and early 1960’s and finally culminated in a proposal in the mid-1980s which resulted in the current bridge being constructed.
The bridge was designed by a consortium headed by a joint venture of J. Mueller International and Stantec. For the private sector, responsibility for this P3 project is with Strait Crossing Development Inc. whose shareholders are Borealis Infrastructure, Vinci Concessions Canada Inc. and Strait Crossing Inc., under a 35 year concession agreement with the Federal Government.
The bridge is founded on 65 piers, 44 of these are spaced at 250m apart. The bridge is 11m wide with two 3.75m wide traffic lanes and is generally 40m above water level with a 60m high navigation span. The Confederation Bridge consists of three parts: the 1.3 kilometer-long West Approach Bridge leaving Jourimain Island, over 14 piers; the 0.6 kilometer-long East Approach Bridge leaving Borden-Carleton, over seven piers; and the 11 kilometre long Main Bridge which joins the approach bridges, resting on 44 piers.

Construction began on October 7, 1993. Crews at the staging facility in New Brunswick created the approach bridges using precast concrete in steel forms, while the main bridge components – including pier bases, shafts, main girders, and drop-in girders – were produced on the opposite side of the Northumberland Strait, at the staging facility in PEI. The completed precast components were then transported by water to the bridge site, and assembled in place by a twin launching truss along with a one-of-a-kind travelling gantry crane called the Svanen. Post-tensioning was used to tie the pier bases, shafts, and girder together into one solid, continuous structure that is designed to last 100 years.

The Confederation Bridge is a notable achievement in both design and construction innovation and has put Canadian Engineering at the forefront of international bridge design.