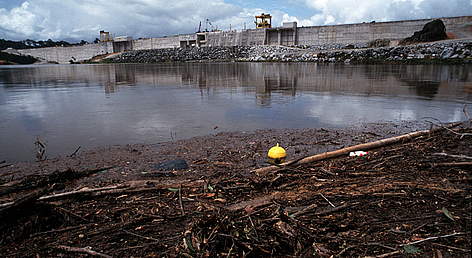 Impacts of W.R.P. on the environment are quite diverse.

The diversity may be due to varieties of resources and associated transformation of these resources.

These impacts may be political, social, economical and environmental.

Impacts caused by dams and reservoirs.

Down stream effects caused by alternation in hydraulic regime. Regional effects in terms of overall aspects including resources use and socio-economic impacts. Impacts by the dams Effects on Floating debris, fish, boats

· Effects on Retention of water from small and moderate floods

· Effects on Tidal barriers and barrages

A dam can completely blocks the passage of the sediments conveyed by river.

Blocked bed load may disturb the balance of delta areas.

The settled sediments reduce the storage capacity of the reservoir.

When desedimented water released from reservoir into river then it tends to reacquire its sediment load and erodes the bank of the canal.

This erosion reduces the stability of the canal

Decomposition of suspended nutrients in reservoir may have consequence for aquatic biota downstream.
It also responsible for smaller sardine catches in delta

Action on retention of water from small and moderate floods

Small floods provides ready access to spawning and renew the water in them.
They prevent the river banks becoming overgrown with trees.
They brings nutrients into lake and ponds.

Effects on tidal barriers and barrages

These barriers and barrages are effected of preventing some upstream tidal flow.
Coastal protection works need to be raised against this effect.

Effect of flooding on fauna

Many animals die due to new reservoir.
Some animals migrate to new areas.
A few animals accommodate to the new environment.
Birds such as water-fowl and waders move into new water habitat.

Action on water other than in the reservoir

Relative humidity:- air inside leaf is saturated (RH=100%). The lower the relative humidity outside the leaf the faster the rate of transpiration as the Y gradient is steeper

Air Movement:- increase air movement increases the rate of transpiration as it moves the saturated air from around the leaf so the Y gradient is steeper.

Temperature:- increase in temperature increases the rate of transpiration as higher temperature

Provides the latent heat of vaporisation

Warms the air so lowers the Y of the air, so Y gradient is steeper

Water supply:- transpiration rate is lower if there is little water available as transpiration depends on the mesophyll cell walls being wet (dry cell walls have a lower Y). When cells are flaccid the stomata close.