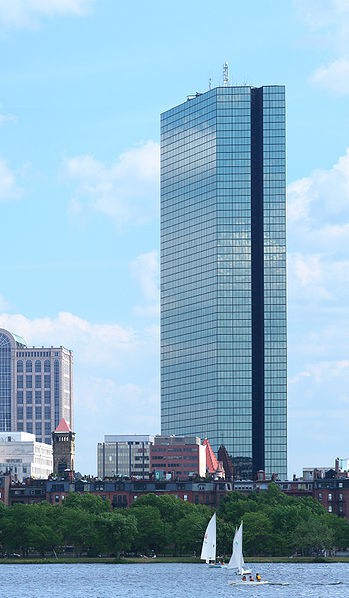 The John Hancock Tower, officially named Hancock Place and colloquially known as The Hancock, is a 60-story, 790 ft (240 m) skyscraper in Boston. The John Hancock Tower had many failures over a period of time, however it’s most well-known failure is that of the falling windows.

When winds would reach anywhere near 45 mph the streets all around the high-rise would be closed off. Starting during its construction some of the 10,344 large panels of glass that comprised the façade of this reflective skyscraper began to fall off causing quite a bit of damage and concern. At one point over an acre of the building was covered in plywood which replaced the failed glass.

The issue was found in the construction of the windows themselves. They were specially made of three layers: one layer of chromium, and an air gap, which gave the building its reflective quality, and two layers of glass on either side, all encased in a metal frame. This metal frame was bonded to the chromium; and this bond is what caused the failure.

It was too strong and didn’t allow the windows to expand or vibrate which windows naturally do, thus the panels were cracking at their connections to the building and plummeting to the sidewalk below. Eventually all the panels were replaced with single pain tempered glass – paid for at the expense of the original window manufacturer.

Other failures were a concern for an unstable foundation and an abnormal about of movement that cause occupants on higher levels to experience motion sickness. William LeMessurier, a famous Cambridge engineer addressed the buildings tendency to sway by installing something called a Tuned Mass Damper which acted like a gyroscope to help counteract the buildings motion.

Later Thurlimann, when asked to review the structural stability of the tower, added lateral bracing to ensure the building would remain standing. Today it is one of the safest skyscrapers and a much admired work of art.