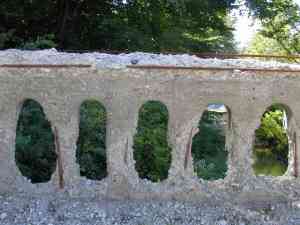 A severe exposure condition on portland cement concrete structures is exposure to cycles of freezing and thawing. Air entrainment is used to enhance the freeze-thaw resistance of portland cement concrete exposed to an external environment. The typical deterioration of concrete exposed to freeze-thaw conditions is random cracking, surface scaling and joint deterioration due to D-cracking. The first two are primarily due to lack of adequately entrained air in the concrete mass or the surface layer, respectively, and the latter phenomenon is primarily related to non-durable aggregate.

Freeze/thaw damage occurs in concrete when the water molecules in concrete freeze and expand beyond the volume constraints of the concrete.

When the >91% of the pores of concrete are filled with water, the concrete is known to be saturated.  When these water molecules freeze, they expand by 9%, and because there is no room for their increased volume, the concrete distresses.  The freeze can cause the bonds in cement around the aggregate to break and the concrete can crack in those places.  Thus, the higher the water/cement ratio in the concrete, the higher risk it is for freeze/thaw damage.  As the seasons pass, concrete goes through the process of freezing and thawing, wearing out over time.  As winters come and go from year to year, the concrete deteriorates.

Certain measures can be taken to prevent freeze/thaw damage to pavements and any concrete structure.  Prevention measures include adding deicing chemicals to the concrete during the winter in order to decrease the freezing point of precipitation as it falls onto the pavement as well as using high strength, air-entrained concrete.  By reducing the freezing point of the precipitation, chemicals such as sodium chloride, calcium chloride, magnesium chloride, and potassium chloride in high concentrations work to reduce the exposure of the pavement to freeze/thaw cycles.