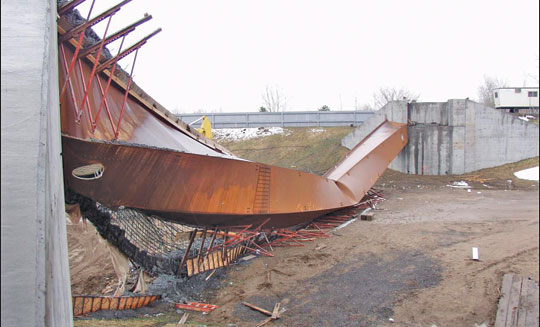 Summary
Lateral torsional buckling occurs when an applied load causes both lateral displacement and twisting of a member. This failure is usually seen when a load is applied to an unconstrained, steel I-beam, with the two flanges acting differently, one under compression and the other tension. ‘Unconstrained’ in this case simply means the flange under compression is free to move laterally and also twist. The buckling will be seen in the compression flange of a simply supported beam.

WHAT IS Lateral Torsional Buckling?

What causes the lateral deflection?

The applied vertical load results in compression and tension in the flanges of the section. The compression flange tries to deflect laterally away from its original position, whereas the tension flange tries to keep the member straight. The lateral movement of the flanges is shown in Figure. The lateral bending of the section creates restoring forces that oppose the movement because the section wants to remain straight. These restoring forces are not large enough to stop the section from deflecting laterally, but together with the lateral component of the tensile forces, they determine the buckling resistance of the beam.

In addition to the lateral movement of the section the forces within the flanges cause the section to twist about its longitudinal axis as shown in Figure. The twisting is resisted by the torsional stiffness of the section. The torsional stiffness of a section is dominated by the flange thickness. That is why a section with thicker flanges has a larger bending strength (pb) than the same depth of section with thinner flanges

How to prevent Lateral torsional buckling

The best way to prevent this type of buckling from occurring is to restrain the flange under compression, which prevents it from rotating along its axis. Some beams have restraints such as walls or braced elements periodically along their lengths, as well as on the ends. This failure can also occur in a cantilever beam, in which case the bottom flange needs to be more restrained than the top flange.