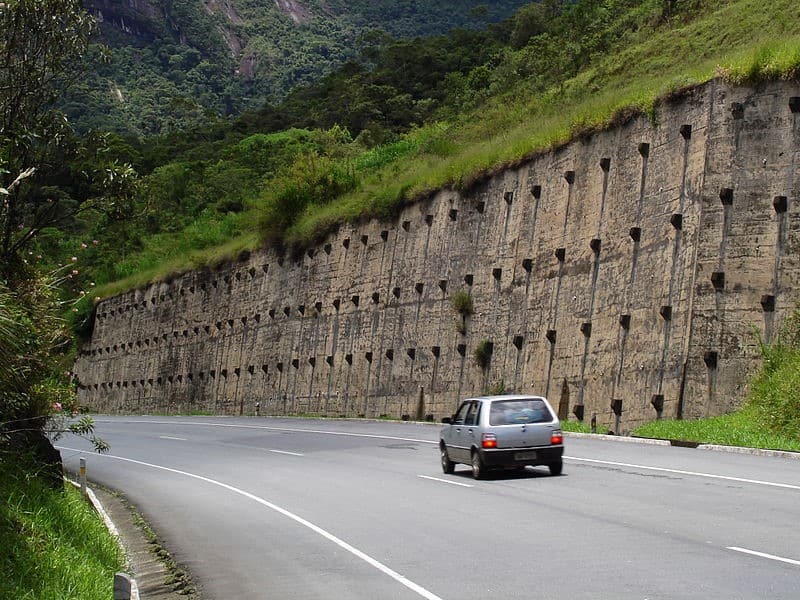 Retaining wall is structures that is constructed and designed to resist the lateral pressure of the soil. Apart from soil, the lateral pressure is caused by the pressure of liquid, earth filling, sand, or other granular material filled behind the wall after it’s constructed. These walls are key components of transportation structures and is commonly employed in the construction of hill roads, masonry dams, abutments and wings walls of bridges etc. The type of material used for the construction of the wall depends on the site conditions, type of material to be retained and also the height of the wall to be constructed. Generally there are 4 types of retaining walls.

The primary function of the retaining wall is to hold the earth back without any stability issues like overturning, sliding or structural failure. Water table, earth fill and surcharge are crucial in retaining wall design. Problems may occur when the pressure of the earth is too much and it may tip over. Basically retaining walls are classified into four types, explained below:

In this type of retaining wall, piles are driven so deep into the earth that the top force which usually tries to push the wall over, is held back. It uses counter force to negate the top force and keep it from tipping over. This wall is used in temporary or permanent works as the piled walls provide high stiffness retaining elements which afford large excavation depths with almost no disturbance to surrounding structures or properties.

These walls are constructed of reinforced concrete. This wall consists of a thin stem and base slab. The base of this retaining wall is divided into two parts namely the heel and the toe. The heel is a part of the base under the backfill. This wall uses much less concrete than retaining walls but it needs careful construction and design. It’s usually economic till 25ft in height. And these walls can either be precast in a factory or formed on the site.

For high retaining walls, deep cable rods or wires are driven deep sideways into the earth, then the ends are filled with concrete to provide an “anchor”. These are also known as tiebacks. They work when a thinner retaining wall is needed or space is limited to install other types of retaining walls. They are very effective for loose soils over solid rocks. Anchored retaining walls are usually employed in lots of highways construction departments where they use them to keep rocks from falling on the roads by accidents.

Conditions of Stability of Retaining Walls

To ensure the stability of a retaining wall, the following conditions or requirements must be met:

Major loads that act on retaining walls are as follows.