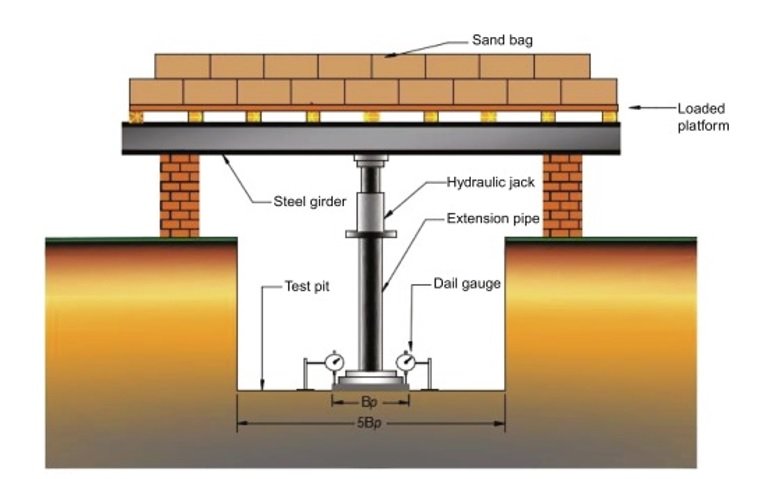 The relationship between structure and the soil is as old as humans. How often have we wondered about the fact that the soil and the foundation are made up of entirely different constituents, yet create wonders together? The integrity of any structure is limited to the capacity of the ground it is founded on. Hence, whenever we erect a structure on the soil it is necessary to check its capacity limits, which is estimated as safe bearing capacity. In fact, it is the first test to be carried out before any construction. If the ground capacity is insufficient for the structure, ground improvement techniques are adopted.

Failure of the soil is determined based on two criteria, one is it’s Shear Capacity and the other is Settlement Criteria. Safe bearing capacity can be theoretically defined as the permissible load the soil can withstand such that it neither fails in shear nor exceeds permissible settlement limits. The SBC of a soil is defined in terms of allowable pressure that can be applied. Unit of Safe Bearing Capacity is kN/m^2 or kip/ft^2. It is also referred as Net Bearing Capacity or Allowable Bearing Capacity of soil.

The sizing of foundation and foundation type is determined based on the structure type; capacity and type of founding soil. It is hence necessary that the safe bearing capacity (SBC) is estimated in every footing design to ensure safety.

In simple words, if we are asked to carry a few sacks of cement, how much we can carry without breaking our bones and without falling is considered as our safe bearing capacity. This is the case with soil too.

We spoke to a representative from the busters group who specialises in pest control in Derby and  has knowledge on the topic at hand, they said, “ There are several ways of discovering the bearing capacity of soils. The first simple method involves digging a well of 2 mx2 and the needed depth.  Level the bottom of the well by spreading the soil manually and it shouldn’t be compacted. In the middle of the well, put a 60 com x60 cm x 5 cm steel plate after that head towards the pins equidistant from the steel plate. Erect a 40 cm x 40 cm wall with bricks, stone blocks or concrete. And after that process you will discover the bearing capacity of soils.”

Plate load test is a popular load test that is used to determine the ultimate bearing capacity and the settlement of the soil under a given load. This test offers the highest rate of accuracy in the case of clayey and sandy soils. Circular or square plates of defined dimensions are placed on the ground. Settlements corresponding to gradually increasing loads are recorded to determine the bearing capacity of the soil.

is considered as a reliable method to directly obtain the safe bearing capacity. A pit of depth equal to the depth of foundation is made and a square cube of known weight is dropped into it from a predetermined height. The depth of the dimension made by the square-cube is measured. The weight of the cube is multiplied with the height of the fall to obtain the ultimate bearing capacity of the soil.

In STP test, the number of blows required to penetrate a standard tube into soil is measured. The penetration number or resistance value is used to determine the ultimate bearing capacity.

After determining the ultimate bearing capacity of the soil, from any one of the tests, we work out SBC of the soil using the following relationship:

For soil, the factor of safety is usually considered as 3.

Safe bearing capacity of a soil depends upon various factors as follows:

Though the safer method is to determine the safe capacity of the soil from tests, IS: code 1904-1961 gives us the presumptive values of the safe bearing capacity of the soil. These values can be used in case of lightly loaded structures or to carry out a preliminary design. The values are given in the table below.

While carrying out the construction in the areas that consist of highly expansive cohesive soils such as peat and black cotton soil, use of such presumptive values must be avoided. A thorough level of site investigation and expert advice shall be sought for such areas to avoid further mishaps.

Peat soil can be deceiving as despite being under the high compact condition it can undergo large settlements under small pressures. Furthermore, its movement also continues for decades.

For the ground that is made up or filled earth many factors like its level of consolidation, nature of the soil, and depth decide its bearing capacity. Safe bearing capacity of such soils may be increased based on the weight overburden soil that was removed while filling it up.

Most of the time soil tests and the factors related are overlooked during the construction as it is considered expensive. We must remember that these tests are necessary to ensure the long life and safety of the structures. It is not a step that can be avoided and instead must be made mandatory.

Overall, we can conclude that it is much necessary to determine the load that the soil can carry safely before we design a structure. Soil structure interaction plays an important role in the design and maintenance of any structure whether small or large. Lack of compatibility may lead to serious disasters too.

Collapse of a structure due to foundation failure (Source: https://www.researchgate.net/figure/10-Foundation-failure-caused-the-collapse-of-this-building-in-Chautara-Sindhupalchowk_fig12_280027905)

So fellow engineers, never take our friend soil for granted. Know its strength too before burdening him. If not, it may let you down.