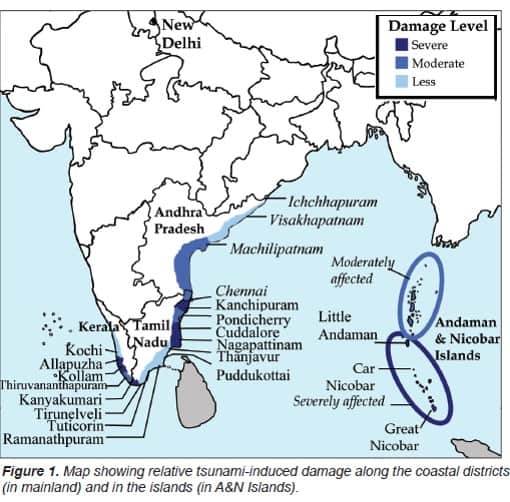 The Mw 9.0 earthquake of December 26, 2004 struck at 06:28:53 am. The maximum intensity of shaking (on the MSK scale) was VII; along the mainland Indian coast, it was V. The Tsunami arrived in the states of Andhra Pradesh and Tamil Nadu along the southeast coast of the Indian mainland shortly after 09:00 a.m. At least two hours later, it arrived in the state of Kerala along the southwest coast. The total number of Indian fatalities was 10,805, with over 5,640 persons missing, according to official statistics (www.ndmindia.nic.in 2005).

The state of Tamil Nadu had the highest number of fatalities — 8,010 (www.tn.gov.in/tsunami 2005) — with the district of Nagapattinam alone accounting for 6,065. The western coast of the Middle Andaman Islands shows emergence of new shallow coral beaches near Flat Island, suggesting an uplift of up to 0.3 m. A mud volcano in the Middle Andaman became active after the earthquake and gray mud and colorless gases were emitted; this resulted in the formation of a sub circular mound of about 70 m in diameter.

Many traditional structures are made of wood, and they performed well in the earthquake shaking. However, a number of new, poorly constructed reinforced concrete (RC) structures suffered severe damage or even collapse due to shaking. The tsunami waves caused severe destruction in the coastal areas of the southern islands. Not all buildings are properly designed and built to ensure ductile response.This building had experienced column damage due to inadequate lateral reinforcing ties in the 2002 Mw 6.5 Diglipur earthquake 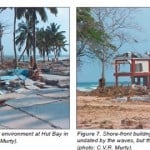