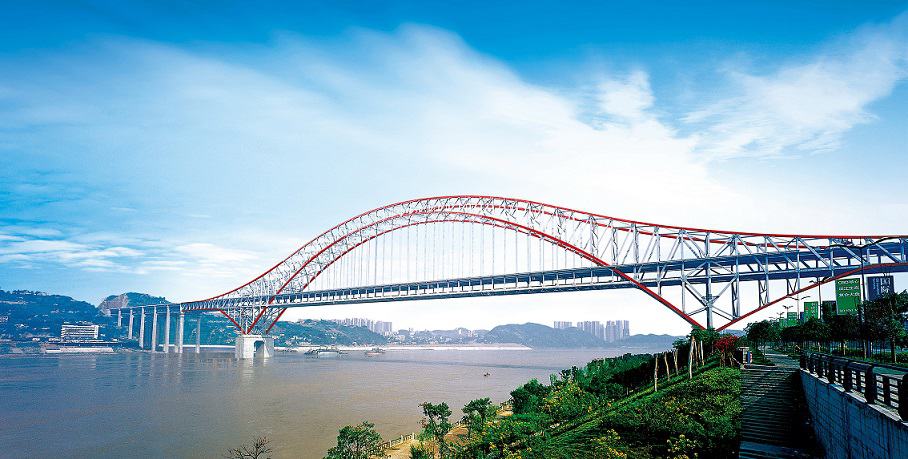 The Chaotianmen Bridge is built across the Yangtze River, Chongqing, China. The total length of the main bridge and both west and east approaches is 1741 m, the span layout of Yangtze River Bridge is 190 + 552 + 190 m to adopt half-through continuous steel truss arch with tie girders in double-level traffic arrangement type.

The lengths of west and east approaches are 314 m and 495 m respectively, both of them are con­tinuous pre-stressed concrete (PSC) box girder bridges. Double-level traffic ar­rangement is adopted with upper deck to be designed in two-way 6 lanes and both side pedestrian lanes, with lower deck in middle two-way municipal light rails and 2 two-way lanes on each side. It is the longest arch bridge in the world.

The span of this Bridge (552 m) is larger than the 550 m span of the Lupu Bridge completed in Shanghai in 2003, and was completed in 2009. This article introduces the design of the main bridge and its components.

Seismic Load: Fundamental Seismic intensity of de­gree VI, design of this bridge according to degree VII.

For the main truss, steel Q420qD, Q370D and Q345qD are adopted; for deck system, Q345qD is mainly adopted, which corresponds to 420 and 355 grade steels. High-strength bolts are

The yield strength σs of steel is adopted ac­cording to National Standard. The design safety coefficient K = 1,7 and the allowable stresses [σ]=σs/K according to dif­ferent thickness.

For upper deck system and both side lanes in lower deck, it is adopted the or­thotropic steel plate of 16 mm thick with closed U-type ribs. Light rail is supported over stringer and cross beam system.

The major part of upper chord is also in quadratic parabola and to adopt circular curve with R = 700 m for transition between the upper chords of middle and end span. The N-type truss is adopted for the main one with central depth of 14 m, the depths at middle support and at end support are 73,13 m (including the depth of stiffening chord being 40,45 m) and 11,83 m respectively.