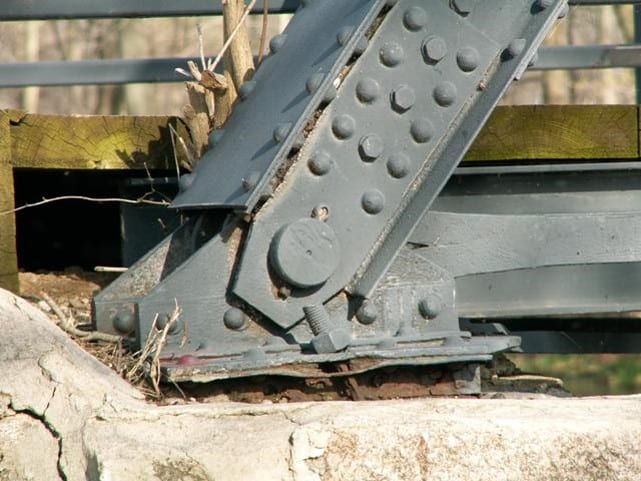 Types & Functions Of Bearings for Bridges

Bridge bearings are used to transfer forces from the superstructure to the substructure, allowing the following types of movements of the superstructure: Translation movements; are displacements in vertical and horizontal directions due to in-plane or out-of-plane forces like wind and self weight. Rotational movements; cause due to moments. Until the middle of this century, the bearings used consisted of following types:

A pin bearing is a type of fixed bearings that accommodates rotations through the use of a steel. Translational movements are not allowed. The pin at the top is composed of upper and lower semicircularly recessed surfaces with a solid circular pin placed between. Usually, there are caps at both ends of the pin to keep the pin from sliding off the seats and to resist uplift loads if required. The upper plate is connected to the sole plate by either bolting or welding. The lower curved plate sits on the masonry plate. Rotational Movement is allowed. Lateral and Translational Movements are Restricted.

For isolation applications in machinery isolation, roller and ball bearing are used. It includes cylindrical rollers and balls. It is sufficient to resist service movements and damping depending on the material used.

AASHTO requires that expansion rollers be equipped with “substantial side bars” and be guided by gearing or other means to prevent lateral movement, skewing, and creeping (AASHTO 10.29.3).
A general drawback to this type of bearing is its tendency to collect dust and debris. Longitudinal movements are allowed. Lateral Movements and Rotations are Restricted.

A rocker bearing is a type of expansion bearing that comes in a great variety. It typically consists of a pin at the top that facilitates rotations, and a curved surface at the bottom that accommodates the translational movements. Rocker and pin bearings are primarily used in steel bridges.

A sliding bearing utilizes one plane metal plate sliding against another to accommodate translations. The sliding bearing surface produces a frictional force that is applied to the superstructure, substructure, and the bearing itself. To reduce this friction force, PTFE (polytetrafluoroethylene) is often used as a sliding lubricating material. PTFE is sometimes referred to as Teflon, named after a widely used brand of PTFE. Sliding Bearings be used alone or more often used as a component in other types of bearings. Pure sliding bearings can only be used when the rotations caused by the deflection at the supports are negligible. They are therefore limited to a span length of 15 m or less by ASHTTO [10.29.1.1]

Sliding systems with a predefined coefficient of friction can provide isolation by limiting acceleration and forces that are transferred. Sliders are capable of providing resistance under service conditions, flexibility and force-displacements by sliding movement. Shaped or spherical sliders are often preferred over flat sliding systems because of their restoring effect. Flat sliders provide no restoring force and there are possibilities of displacement with aftershocks.

A POT BEARING consists of a shallow steel cylinder, or pot, on a vertical axis with a neoprene disk which is slightly thinner than the cylinder and fitted tightly inside. A steel piston fits inside the cylinder and bears on the neoprene. Flat brass rings are used to seal the rubber between the piston and the pot. The rubber behaves like a viscous fluid flowing as rotation may occur. Since the bearing will not resist bending moments, it must be provided with an even bridge seat.

It consist of a laminated elastomeric bearing equipped with a lead cylinder at the center of the bearing. The function of the rubber-steel laminated portion of the bearing is to carry the weight of the structure and provide post-yield elasticity. The lead core is designed to deform plastically, thereby providing damping energy dissipation. Lead rubber bearings are used in seismically active areas because of their performance under earthquake loads.

3 thoughts on “Types & Functions Of Bearings for Bridges”