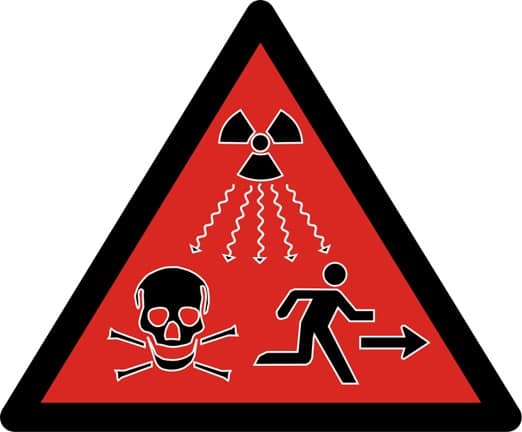 Since the development and utilization of nuclear energy during World War II, countries have struggled with the issue of disposing of high-level nuclear waste . Nuclear waste is one of the biggest downsides to nuclear power, and can remain dangerous for hundreds of thousands of years. Geological disposal is often stated as the most preferable way of dealing with it, but what does it entail? In this report we will discuss problems that need to be overcome , ongoing research and try to choose a suitable location in India for disposal.

Classification of waste on basis of radioactivity

Generated from hospitals and industry, as well as the nuclear  fuel cycle. Low-level wastes include paper, rags, tools, clothing, filters. Some high-activity LLW requires shielding during handling and transport but most LLW is suitable for shallow land burial

Immobilization of high level liquid waste into vitrified borosilicate glasses. Engineered interim storage of vitrified waste for passive cooling in pools near power-plant and surveillance over a period of time qualifying it for ultimate disposal. Ultimate storage disposal of vitrified waste a deep geological depository.

Disposing of high-level radioactive waste from nuclear reactors in extremely deep boreholes.  Placing  the waste as much as five kilometers beneath the surface of the   Earth. Waste is sealed in strong steel containers and lowered down the borehole, filling the bottom one or two kilometers of the hole. Borehole is then sealed with materials, including perhaps clay, cement, crushed rock backfill, and asphalt, to ensure a low-permeability 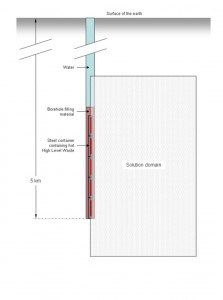 A high-temperature scenario involves very young hot waste in the containers which releases enough heat to create a melt zone around the borehole. As the waste decays and cools, the melt zone re-solidifies, forming a solid       granite sarcophagus around the containers, entombing the waste forever. Environmental impact is small. Can be carried out near nuclear power-plant eliminating transportation risks.

A deep geological repository is a nuclear waste repository excavated deep within a stable geologic environment (typically below 300 m).  Repositories include the radioactive waste, the containers enclosing the waste, other engineered barriers or seals around the containers, the tunnels housing the containers, and the geologic makeup of the surrounding area. Geological disposal can be safe, technologically feasible and environmentally sound

Moreover these property vary from site to site.

So in following slides we will look upon research done in different types of host rock.

In Finland research was done at onkalo . While in Sweden research was done at underground Äspö Hard Rock Laboratory.  Tunnels and other excavations in hard granitic rocks are stable over long period of time. But excavation results in stress release and opening of fractures.Permeability is very low unless water conducting joints or open fractures are present.

Research in clay based rocks

In France Andra (French National Radioactive Waste Management Agency) is the public body responsible for the long-term management of all radioactive waste. Research was done at Meuse/Haute-Marne underground research laboratory which is in clay formation. Meuse/Haute-Marne is underground laboratory, located at a depth of 490 meters in the heart of a very stiff (indurated) clay formation (argillite). Over 10 years of research was done using:

Properties of the rock formation

India has extensive & varied experience in the operation of near surface disposal facilities (NSDFs) in widely different geo-hydrological and climatological conditions by BARC. There are seven NSDFs currently operational within the country. In India, the most promising formation is granitic rocks. A program for development of a geological repository for vitrified high level long lived wastes is being pursued actively, involving In-situ experiments, site selection, characterization and laboratory investigations

For assessment of the rock mass response to thermal load from disposed waste , an experiment of 8-years duration was carried out.
At a depth of 1000 m in an abandoned section of Kolar Gold mine.

Based on above study these three regions in India can be used for disposal Western Rajasthan, Western Andhra Pradesh, Eastern Karnataka. Since this is very preliminary study , further research in these narrowed down regions can be carried out.