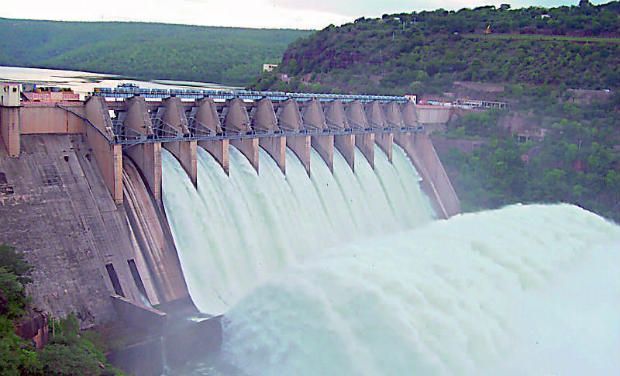 A dam is a hydraulic structure or assembly that is constructed across a river to form a reservoir on its upstream side for confining water for various purposes like Hydropower, water supply, flood control, navigation, fishing and recreation, irrigation. Dams are constructed depending on the purpose for which they are used. Different types of dams are used for one or more of the above purposes.

Crest: The top of the dam is called the crest which in some cases, is used for providing a walkway or roadway over the dam.

Parapet walls: These are lowly built protective walls built on either side of the roadway on the crest.

Heel: River bed at upstream side.

Spillway: This is constructed to take care of the excessive/surplus water. When the water level rises above the maximum level, it will flow through the spillway.

Gallery: This is a passage or small room like space, within the dam which is provided for having space for drilling grout or drainage holes. These are also used for accommodating the instrumentation for studying the performance of the dam.

Diversion tunnel: This is the tunnel which is constructed to divert the direction of water to bypass the dam construction site. The dam is built while the river flows through the diversion tunnel.

Sluice way: This is the opening in the dam near the base. It’s provided to clear the accumulation of silt in the reservoir.

Free board: This is the area between the highest level of water on the reservoir and the top of the dam.

Dead storage level: It’s the level of permanent storage under which the water will not be withdrawn for any purpose.

Dams can be classified in many ways. But most usual ways of classification is based on

Types of dams classified based on their function:

As the name suggests, this dam is constructed to store the water during the rainy season when there is a large flow of water. Storage dams store water for hydroelectric power generation, irrigation or flood control project or may be used for improved habitat for fish and wildlife. A dam’s primary function is to store water. Hence a dam is a storage dam unless qualifies otherwise.

When there is a need for diverting the water of the river in to a conduit or an off-taking canal, the diversion dam is constructed. These dams provide sufficient pressure for pushing the water into various systems like ditches, canals etc. These dams can be used for irrigation and also for diverting water from a stream in to a distant reservoir for storage. These are sort of storage weirs which divert water and have a small storage reservoir on upstream. Sometimes these are also termed as weirs.

These are the dams which are constructed to take care of the floods. When there is flood, the detention dam stores some flood water and detain the flow of the river on the downstream side. Thus the effect of the sudden floods is reduced. The water which is stored in the dam is then released gradually at a controlled rate depending on the carrying capacity of the channel downstream so that the area of downstream of dam is protected from flood.

The dam constructed to retain the debris from the river is called a debris dam. This dam holds off the   debris like sand, gravel and drift wood flowing in the river with water. When the river passes the debris dam, the water is relatively clear.

Types of dams classified based on their structure and design:

A gravity dam is an enormous sized dam composed from concrete and stone masonry which are designed to retain large volumes of water. The weight of the dam resists the horizontal thrust of water pushing against it, because of concrete. Gravity holds the dam down to the ground, which stops the water from toppling over. Hence these are called gravity dams. These are well suited for blocking rivers. And as these dams rely on their own weight to hold back water, it’s mandatory that they should be built on solid foundation of bedrock.

An earth dam (made up of soil) is built by compacting each layers of soil. The most impervious material is used to form the core and placing the permeable material on the upstream and downstream sides. The side facing made of crushed stone prevents soil erosion. And the spillway made of concrete, protects the dam if the water overtops the dam. This type of dam resists the forces exerted on it mainly because of the shear strength of the soil.

To some extent, the weight of this dam also helps in resisting some forces, but the structural behavior of dam is different from gravity dam. These earth dams are built in wide valleys having flat slopes at abutments. These don’t require strong foundation as gravity dams. Hence these can be built at sites where the foundations are less strong. The height of this dam depends on the strength of foundation material.

This is a type of embankment dam which uses various sizes of materials to provide stability. This dam uses rock fragments and boulders of large size. It also has an impervious membrane on the upstream face to facilitate water tightness or to reduce the seepage through the dam. This membrane is generally made of cement concrete or asphaltic concrete. In earlier days, they used steel and timber membranes, but now they are obsolete.

This dam is curved in plan with its convexity towards the upstream side. This dam transfers the water pressure mainly to the abutments by arch action. This is well suited for the narrow canyons with strong flanks (abutments) which are capable of resisting the thrust produced by the arch action. The arch dam has either single or double curvature in the vertical plane. But the one with double curvature is more economical and is widely used.

This dam, also called as hollow dam, is a dam with a water tight upstream side that is supported at intervals on the downstream side by a series of buttress or supports. This dam is called hollow dam because the buttress does not form a solid wall that stretches across the river valley. Most of these dams are made of reinforced concrete and are heavy which pushes the dam into the ground. The water pushes against the dam but the buttresses are inflexible and prevent the dam from falling over.

There are 3 types of buttress dams namely deck, multiple arch and massive head. These dams are triangular with concrete walls that transmit water pressure from the slab to the foundation. The buttress dams require less concrete than the gravity dams but these are not necessarily cheaper than gravity dams due to the extra cost of the form work, reinforcement and more skilled labor. The foundation requirements of a buttress dam are usually less strong or tough than those in gravity dams.

A steel dam comprises of a steel frame work with steel skin plates on the upstream side. There are two types of steel dams: direct-strutted and cantilever. Direct strutted dams have the water pressure transmitted directly to the foundation by using inclined struts. Cantilever steel dams’ upper part of its deck is supported by a bent, which is formed into a cantilever truss.

This type of dam is made of wood, usually primarily coniferous timber such as pine and fir. These are good for small heads and have sluices. The opening of the timber dams are controlled by flanks and the sluices are very long, divided into several openings. These openings are covered with wooden shields that can be raised and lowered.