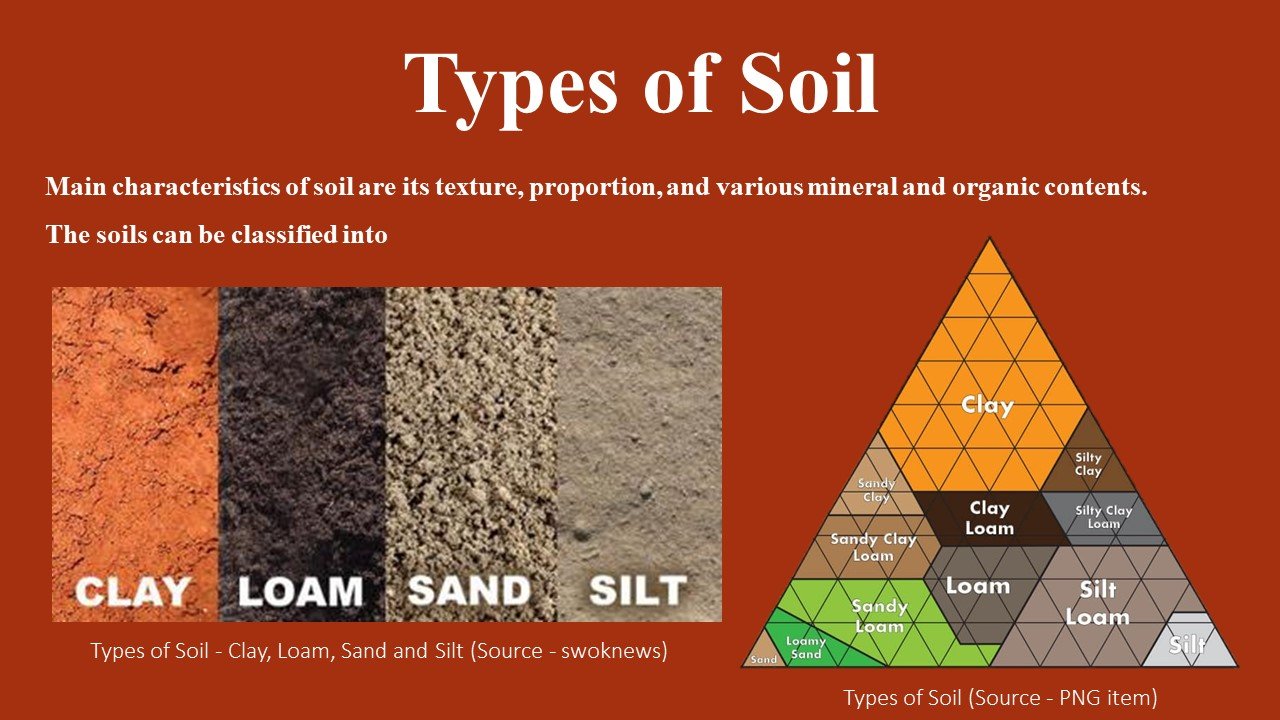 The organic and inorganic components of the earth’s surface that provide the environment for plant growth are referred to as soil. There are various types of soils on earth. It steadily develops through time, is composed of several diverse materials, and varies as a result of these factors.

The breaking down of rocks into their component pieces generally results in the formation of soil. The rocks are broken up into tiny pieces and combine with the soil when several forces act on them. The effects of the wind, water, and reaction between salts are also part of these forces.

Classifying soil is important to ensure that the right type of soil is adopted for the proposed application. It is also important to know the soil type at construction site so that an appropriate structural solution can be adopted. If necessary, ground improvement techniques can be proposed to improve soil properties.

Sand is a granular substance that occurs naturally and is made up of tiny pieces of rock and minerals. A soil is referred to as sandy if it contains more than 85% of its mass in sand-sized particles.

Sandy soil is likely to be deficient in nutrients, bright, warm, and dry. Because they include a large amount of sand and minimal clay, sandy soils are frequently referred to as “light soils”. These soils are convenient to work with and quickly drain water. Compared to clay soils, they heat up in the spring more quickly, but they are also likely to dry out in the summer and have low nutrient levels that are exposed to rain.

Unconsolidated granular elements like rock fragments, mineral flakes, or oceanic materials comprise the majority of sand’s composition. It is primarily composed of minerals of silicates and granular silicate rock. Usually, quartz predominates among minerals because of its exceptional weather resistance. Sand also contains other typical rock-forming minerals such as amphiboles and micas. The most abundant component in the sand is quartz, popularly called silicon dioxide. This is produced by the reaction of silicon with oxygen.

Fine sand has a particle size range of 0.075mm to 0.425 mm, medium sand of 0.425mm to 2 mm, and coarse sand of 2mm to 4.75 mm. When you touch wet or dry sandy soil between your fingers, the larger sand particles give the soil a grainy texture. The shape of the particle can be sub-angular, angular, rounded, flat, or elongated. The surface might be abrasive, polished, or smooth.

Silt is a loose sedimentary substance that forms naturally and contains tiny rock particles. Silty soil is characterized as having 80% silt in it. Silt soil is a type of light, moisture-retentive soil that has a high fertility value. Because silt soils contain mostly medium-sized particles, they drain easily and retain moisture well.

Due to its origin in river sediments, silt soil is rich in nutrients. Because many plants grow in silt, it is among the better soil types for gardening. Being easily compacted is a problem with silt soil. When it rains heavily enough to wash it off or is frequently stepped on, this becomes an issue. The solution to this problem is to add organic matter to the soil to form larger clumps of soil. The soil holds water more effectively than sand because it is fine and smooth. Since silt is easily moved by flowing currents, it is typically found close to rivers, lakes, and other bodies of water.

A sedimentary substance size in the range between clay and sand is called silt. Silt has particles between 0.002 to 0.075 mm in size. Due to its fineness, silt is a material with limited or no plasticity. Because it is so fine, silt soil easily forms into a ball and another shape in your hand when it is wet, and when it is extremely wet, it merges with water to create fine, runny mud puddles. Silty soil, not rocky or grainy, is slippery when wet. Rocks like siltstone are created when silt deposits are squeezed and the particles are pushed together.

Silts are comparatively resistant to moisture, challenging to compact, and extremely vulnerable to frost heaving. Contrary to clays, which preserve their volume with changes in shape, silt masses experience a change in volume along with a change in shape (a feature known as dilatancy). The ability to distinguish typical silt in its loose, wet state is made possible by the dilatancy of silt and its fast response to vibration. When dry, silt has a smooth texture between the fingertips as opposed to the gritty feel of fine sand and can be readily ground up with finger pressure (indicating very minimal dry strength).

Clay consists of extremely small particles. The term “clay soil” refers to a soil that contains 50% clay. When clay is wet, it becomes heavy and sticky. When it dries, it becomes hard and concrete-like. Only a tiny quantity of air can get through its gaps because of the microscopic size of particles and their tendency to clump together.

Large clay-sized particles compose the majority of the chemical compositions of soil. They store a large number of plant nutrients in the soil, including calcium, phosphorus, potassium, magnesium, potassium, and trace elements. Humus is stabilized in the soil by clays’ reaction with the byproducts of organic matter decomposition. An extremely infertile soil can be one that lacks clay particles.

This soil is very good at storing water and resists the penetration of moisture and air. When wet, it seems extremely sticky to the touch; when dry, it feels smooth. The densest and most heavy form of soil is clay, which does not drain effectively or give space for roots to spread out.

The smallest soil particles are clay particles, which are less than 0.002 mm or 2 microns in size. It is made up of minute and sub-microscopic fragments that are the result of the chemical deterioration of rocks. Cohesive soil with fine grains is clay. When wet or dry, they readily adhere to one another and take on a sticky or glue-like quality.

Clay soils hold a lot of water because of the gaps between clay particles, which compose more than 25% of clay. Clay expands as it is exposed to water, while when it dried out, it contracts. In contrast to sand, which is often rounded, particles of clay are thin, flat, and covered in microscopic plates. Organic clay is utilized in building as mud mortar due to its highly compressible nature and has a high strength when dried.

In general, clays are weak, highly compressible, and subject to large volumetric changes. In geotechnical engineering, clay has been investigated and is currently being studied due to its exceptional plasticity, permeability, bearing capacity, and settlement properties.

Loam is a popular type of soil among gardeners. It has a good mix of all 3 soil types (sand, silt, and clay) as well as humus. It can retain moisture and nutrients, making it more suitable for farming. Aside from these, due to its inorganic origins, it also has greater calcium and pH levels.

Loam contains the correct amounts of humus and each type of soil, both of which are necessary to provide nutrients for growth. Loam soils are the best for growing plants because they contain a combination of sand, silt, and clay and offer favorable characteristics. Loamy soils don’t dry out in the summer or get flooded in the winter.

A loam is a soil that has 30% clay, 50% sand, and 20% silt. This soil is dry, has a dark appearance, and crumbled when touched. Nutrient supply to the roots is enhanced by the airspaces that separate the particles.

In comparison to sandy soils, loam soils often have higher levels of nutrients, moisture, and humus. Additionally, compared to silt and clay-rich soils, they have better air and water infiltration and drainage properties, and they are also easier to till.

FAQs on Types of Soil

What are the four major types of soils?

The four major types of Soil are Sand, Clay, Silt and Loam.

What are Soils classified based on?

Why is it important to know the different classifications of soil?

Classifying the soil helps in choosing the soil that is suitable for the proposed application. In construction industry, knowing soil is important to select the right foundation type, ground treatment and to decide the design geotechnical parameters.