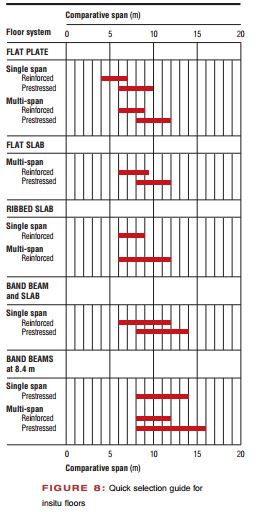 Traditionally, concrete floor systems are reinforced using bars, fabric or using high-strength strand which is stressed. The action of prestressing with a straight or a draped cable in concrete enables the applied loads to be balanced by the uplift force so that practically no deflection results. This is a significant benefit in long-span floors as it eliminates the need to camber formwork or to provide deeper reinforced concrete sections.

Actual floor systems in buildings come in all sizes, shapes, and forms. There are so many variables to any floor system such as different spans, offset spans, cantilevers, and the extent of continuity, the effects of beams, columns and walls on the slab system, etc that it is difficult to cover all situations in a limited series of charts. With the range of sophisticated computer packages now available for concrete floor design, it is strongly recommended that once a floor system and initial sizes are chosen then a series of trial runs be carried out to determine the appropriate thicknesses and details as part of the preliminary design process.

A flat slab is a one-way or two-way system with thickenings in the slab at the columns and loadbearing walls called ‘drop panels’ Figure. Drop panels act as T-beams over the supports. They increase the shear capacity and the stiffness of the floor system under vertical loads, thus increasing the economical span range.

A flat plate is a one- or two-way system usually supported directly on columns or loadbearing walls Figure. It is one of the most common forms of construction of floors in buildings. The principal feature of the flat plate floor is a uniform or near-uniform thickness with a flat soffit which requires only simple formwork and is easy to construct. The floor allows great flexibility for locating horizontal services above a suspended ceiling or in a bulkhead.

This system consists of beams framing into columns and supporting slabs spanning between the beams Figure. It is a very traditional system. The relatively deep beams provide a stiff floor capable of long spans, and able to resist lateral loads. However, the complications of beam formwork, co-ordination of services, and overall depth of floor have led to a decrease in the popularity of this type of floor.

Ribbed floors consisting of equally spaced ribs are usually supported directly by columns. They are either one-way spanning systems known as ribbed slab or a two-way ribbed system known as a waffle slab. This form of construction is not very common because of the formwork costs and the low fire rating. A 120-mm-thick slab with a minimum rib thickness of 125 mm for continuous ribs is required to achieve a 2-hour fire rating. A rib thickness of greater than 125 mm is usually required to accommodate tensile and shear reinforcement. Ribbed slabs are suitable for medium to heavy loads, can span reasonable distances, are very stiff and particularly suitable where the soffit is exposed.

This system consists of a series of parallel, wide, shallow beams (known as band beams or thickened slab bands) with the floor slab spanning transversely between the bands Figure. The floor slab is designed as a continuous slab, with the shallow band beams carrying all loads from the slab. Band beams or thickened slab bands are a two-way slab system and are not treated as beams, except for shear.

This system consists of a slab spanning between beams (which span between columns) and usually an intermediate joist in one direction. Frequently, the slab thickness between the joists is controlled by requirements for fire-resistance.