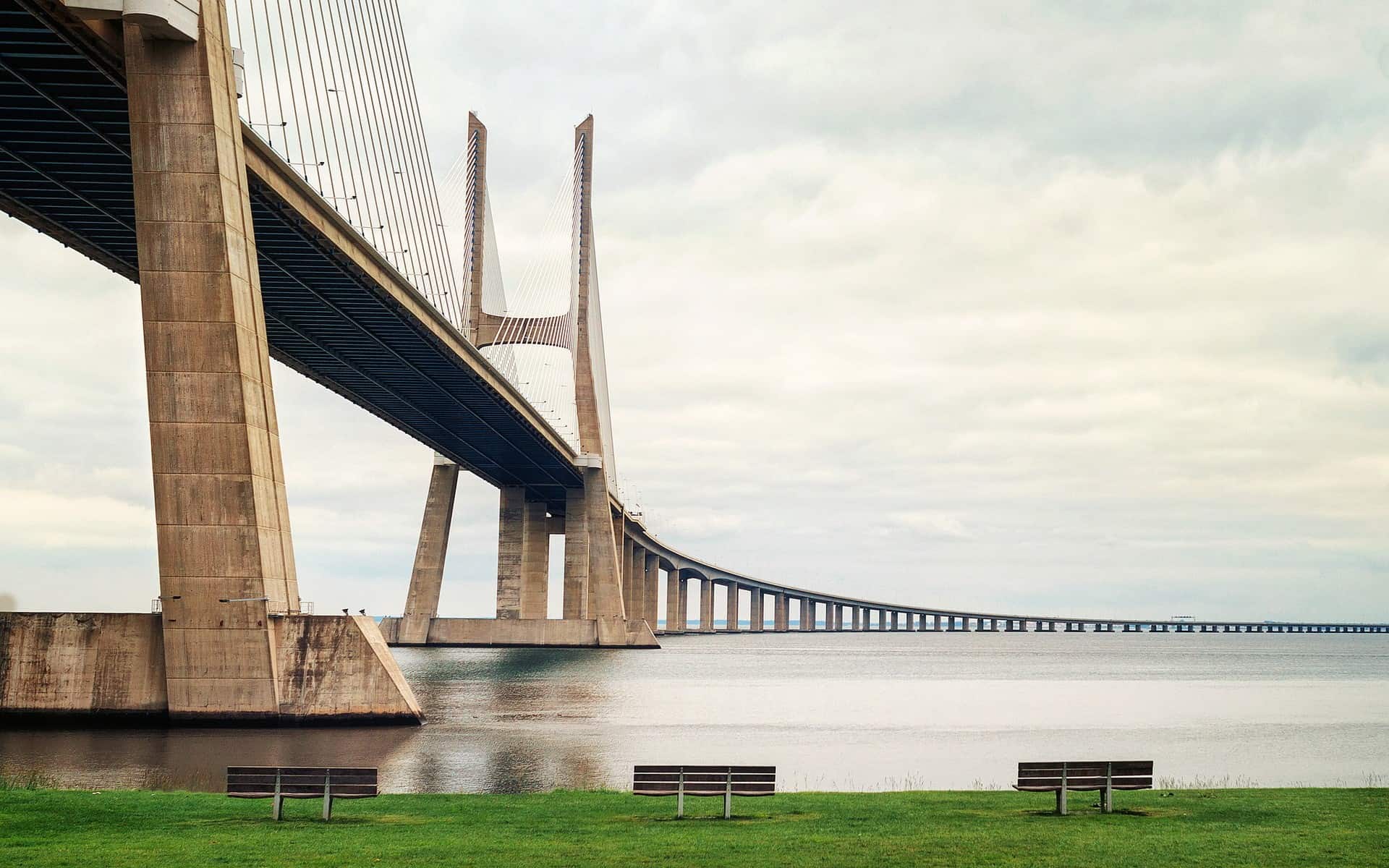 – total length of 17.2 km (10.7 mi)
– cable-stayed bridge flanked by viaducts
– Height 155 m (509 ft)
– Longest span 420m
– speed limit 120 km/h (75 mph)
– $1.1bn project
– Design wind speed 250 kmph
– foundation piles up to 2.2 m diameter driven down to 95 m
Vasco da Gama bridge
1991 The Portuguese Government decided to construct a Second Crossing over the River Tagus. GATTEL (Gabinete para a Travessia do Tejo em Lisboa) was established, the purpose of which was to decide on the location of the Crossing, as well as to co-ordinate and control the procedures necessary to promote its construction and operation as a private concession.
1994 (April) LUSOPONTE, a consortium of Portuguese, British and French companies, won the international public tender for the concession to design, construct, finance and operate the new crossing.
1995 (February) Vasco da Gama Bridge Construction was begun.
1998 (29 March) – Vasco da Gama Bridge opened to Traffic
The location of the New Crossing was chosen in order to lighten traffic on the 25 April Bridge and to prevent heavy traffic, travelling from north to the south of the country, passing through the city of Lisbon. This project, which was completed in a very tight schedule in order to allow for easy access to Expo’98, also included an expropriation and re-housing project, which for the first time in Portugal was undertaken by a private entity. One of the ever-present concerns of this huge project was the preservation of its surrounding environment, resulting in a vast environmental programme. This program was implemented from the very onset of construction and included, among other things, the
Samouco Salt Pans located in the Special Protection Zone. The construction of Vasco da Gama Bridge over the river Tagus by Lusoponte has now passed into the annals of the history of civil engineering as one of the largest and most
successful projects of the 20th Century. This Project gained international recognition when it was awarded first prize by the prestigious Ibero-Americana Institution of Architecture and Civil Engineering in the year 2000.

A 488m long viaduct which spans the main railway line and several local access roads, with a variable deck width to accommodate the slip roads. This section was managed by Teixeira Duarte.

A 672 m long viaduct comprising pre-cast concrete segments and placed in a inner way on each side of the piers. The works were managed by Campenon Bernard SGE.

The Main Bridge is a spectacular concrete structure as the deck it is stayed to main pylons. Its central span is of 420 m and the side spans of 203 m. The central pylons are 150 m high and the deck gives a clearance of 47 m above water level on the navigation channel called North Channel. The deck is a mix structure composed with concrete slabs laying on steel cross beams casted on two side concrete beams where the stays are linked to the pylons. The H-shaped north and south pylons, stand on foundations designed to withstand impact from a 30.000 tonne ship travelling with a speed cruise of 12 nuts. Each foundation of these pylons are casted on 44 precast piles with 2,2 m diameter which are bored up to 90 m. The Main Bridge works were managed by Campenon Bernard SGE.

The construction of the 6,351m Central Viaduct was carried out using double pre-cast units with 78 m long weighing 2,200 tonnes placed on 81 piers. The foundation of each pair of piers are cast on 8 driven piles, with 1.7 m diameter reaching sometimes 65 m deep on the river bed. The deck is less than 14m above water level for most of its length but rises to 30 m over two navigation channels, the Barcas Channel and the Samora Channel with spans of 130 m to accommodate medium sized vessels. The piers located on these two channels were also designed to withstand ship impact. Five of the deck sections have wider edges to provide for emergency vehicle parking. A huge  pre-casting yard at Seixal, 22 kms downstream from the bridge, was used to manufacture concrete pre-cast units for this viaduct. The deck sections were made in eight pieces, stitched into 78 m long beams and then it was applied the use of pre-stressed cables. The deck beams where then transported to the site on the giant crane vessel Rambiz. The yard worked to a schedule, producing one beam every two days.

The South Viaduct with 3.825 metres long consists in a twin deck with 45 metres spans, which were, cast in situ using twin launching girders. The 85 groups of 4 piers of this Viaduct are cast partially on land and partially on marine driven piles. This Viaduct land section crosses the Samouco Salt Pans an environment area for birds. This Viaduct was constructed on a temporary embankment, which was removed after the works conclusion. The construction was carried out by Somague.

The 3,9 km South Access links the Vasco da Gama Bridge with the South Interchange mainly through agricultural land. The most closed local links are Setubal (A12 motorway) and with Alcochete and Montijo (Coina Ring). The Toll Plaza is located about halfway along this stretch south/north bound and incorporates 12 booths with cash or automatic systems means of payment. On both sides of the crossing the driver can find a fully service area, close to the South Viaduct. The construction which involved 655.000 m3 of earthworks was carried out by Mota & Companhia.