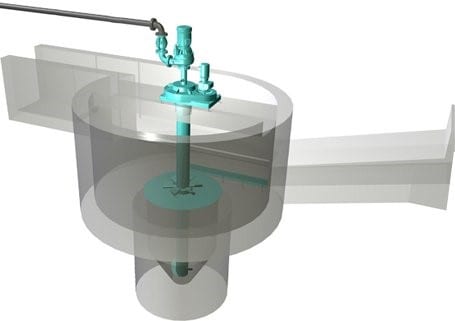 Grit is the heavy mineral material found in the wastewater influent in the treatment plant. It consists of gravel, sand, broken glass, fragments of metal and inorganic solids which have subsiding velocities or specific gravities greater than organic putrescible solids present in wastewater. Grit chambers are used to remove grit present in the wastewater. Grit has a specific gravity ranging from 2.4 to 2.65. They settle much more rapidly than organic solids.

Grit chambers are used to remove grit present in the wastewater. Their functions are:

It is also inevitable to reduce grit load for the safe operation of heat exchangers and pressure diaphragm pumps.

Grit chambers are classified into two, based on the mechanism of removal of grit. They are:

It is a narrow open channel of about 10-18 meters long and with a depth of 1 to 1.3 m. The velocity in the grit chamber is maintained in such a way that the velocity  will carry most organic particles through the chamber and will tend to re-suspend any that settle, but will permit the settling of heavier grit particles. So it is usually designed to maintain a velocity of 0.3 m/s. To maintain a fairly constant velocity of flow, a control section is used. These control sections are classified as following:

Aerated grit chambers consist of a spiral flow aeration tank enabled with air diffusion tubes placed on one side of the tank. They control the separation of inorganic and organic particles by producing a rolling flow pattern. The heavier particles tend to settle down to the flow due to their higher settling velocities and lighter particles are carried with the roll of spiral motion and eventually out of the tank.

Grit chambers are also classified on the basis of mechanism of cleaning them. They are:

Grit is usually washed after removing it from the chamber, unless it may contain considerable amount of organic matter which causes unpleasant odor. It usually devoid of odor and resembles with sand and gravel particles after washing them. They are mainly disposed of by dumping or by a sanitary landfill. The method of disposal is selected on the basis of physical and chemical characteristics of grit, quality, availability of land for disposal etc.

A detritus tank is a grit removal unit which removes silt and some organic matter along with the grit. This is achieved by reducing the velocity of flow through the tank and increasing the detention time. Thus it is mainly used for removing finer particles than those removed by a grit chamber. It is a continuous flow settling tank which is either of in rectangular or in a square shape.

The sides of tanks are vertical which are gradually tapered to the bottom to form a trough for the collection of detritus. The velocity of flow maintained in the tank will be of 0.2 to 0.3 m/s and the detention time will be 3-4 minutes. The depth of tank will vary from 2.5 m to 3.5 m.

Skimming tanks are used to remove floating substances like grease, oil, fats, soap, fruit skins etc. if these are not removed, they can cause severe damages to several equipments in a wastewater treatment plant. Skimming tanks used are generally rectangular or circular in shape having a detention time of 3-5 minutes.

When the flow enters the skimming tank, these floating matters will rises and remains in the surface of wastewater and subsequently removed. The clear wastewater is removed either through an outlet places in the bottom of tank or through partitions given at the bottom sidewalls.