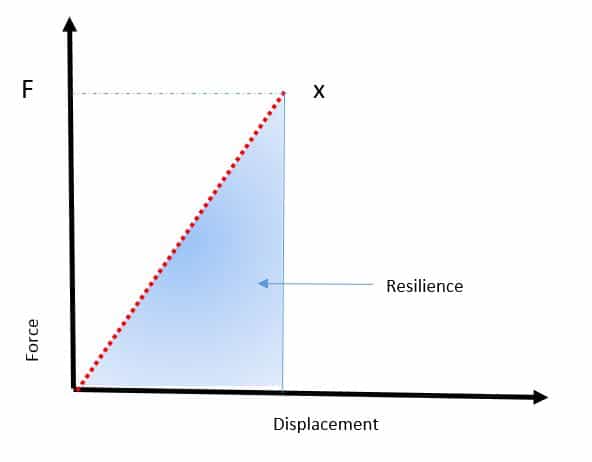 Resilience and Modulus of Resilience

Resilience. Resilience is the total elastic strain energy which can be stored in the given volume of metal and can be released after unloading. it is also equal to area under load deflection curve within elastic limit. Modulus of Resilience is defined as elastic strain energy per unit volume and it is equal to area under stress strain curve within elastic limit.

Let us consider a bar of length l and cross-sectional area A hanging vertically fixed at top, subjected to a normal pull P. At zero-th instant of application of force, induced deflection is zero. Gradually load is increased within proportional limit. At position X, the amount of applied load is F which causes a displacement δ.

To resist the effect of external force, reactive work will be done by the force, generated internally due to deformation of body. This reactive work is defined as Internal Work or Strain Energy of the system, which is symbolized by U. Amount of strain energy is numerically equal to the external work done on the members. As loading is done within proportional limit, as soon as load is released, the system also will lose energy and will come back to original position. This property of an elastic material to absorb and release energy with change in loading is called Resilience. For suspension, spring action or load absorption, a metal with high resiliences should be used. Greater the yield stress, greater the modulus. Hence high tensile steel has greater value than mild steel.

Another very important parameter in this context is Proof-resilience. It is the maximum strain energy stored in a body before yielding occurs. Strain energy will be maximum when the body will be stressed up to elastic limit. And proof-resilience per unit volume is known as Modulus of Resilience.