Blasting is the use of buried explosives to cause the densification of loose cohesion less ground. The principal is that the blasting of explosives in a predetermined pattern causes liquefaction, followed by the expulsion of pore water and subsequent densification of the ground. Blast densification is being utilized for more than 80 years to densify loose, saturated sand deposits.

The aim of this ground-improvement technique is to densify and improve the engineering characteristics of loose sand deposits and thus prevent or minimize the effects of liquefaction during an earthquake. The liquefaction of loose, saturated sands due to seismically induced ground motions continues to be the major source of damage to facilities and loss of human lives after severe earthquake events.

Procedure of the blasting for ground improvement

Materials needed for blasting such as dynamite sticks, detonator

The energy released by the explosives creates compressive radial stresses in the soil mass as the shock wave approaches and generates tensile stress as the shock wave passes .The resulting cyclic stress increases the pore pressure, and the effective stresses acting on the soil are gradually reduced. As the pore water pressure dissipates, the grain particles rearrange into a denser and more stable configuration.

Blast densification offers an economical approach, when compared with other alternatives, to densify large areas since it is a relatively rapid process and heavy construction equipment is not needed, making it possible for work to be carried out in remote or difficult areas. 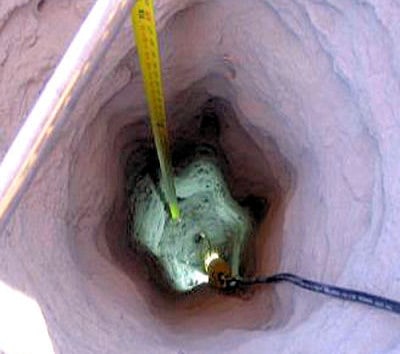 Charge being placed in the borehole

Blasting is more effective in loose sands that contain less than 20% silt and less than 5% clay. In case of partial saturated soil, the capillary action obstructs the densification tendency by preventing soil particles to come close. So this method is not useful for partial saturated soils. When deeper deposits are in question, the blasting is done in stages. Repeated shots are more effective than a single larger one.

The top surface up to 1m gets disturbed and needs surface compaction. Although blasting is quite economical, it’s limited by several considerations as it produces strong vibrations that may damage nearby structures or produce significant ground movements.