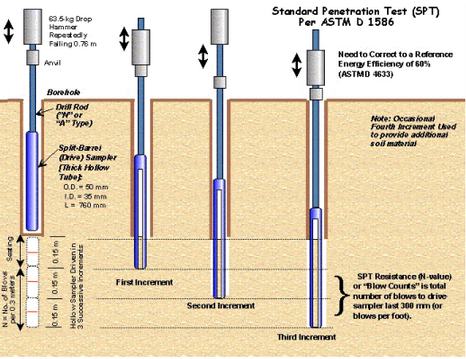 The standard penetration test is widely used to determine the parameters of the soil in-situ. The test is especially used for cohesion less soils. This process consists of a split spoon sampler which is driven into the soil through a borehole at the desired depth. The test can be performed in a wide variety of soil types as well in weak rocks but it not suitable for soft clay.

The cone penetration test is one of the most popular in situ test because it’s fast, economical, and also provides an evaluation of the soil properties as well as the profile of the geostratigraphy. This test consists of a steel cone, a friction jacket, sounding rod, mantle tube and driving mechanism. The CPT can be used in very soft clays to dense sands but is not appropriate for gravels or rocky terrain. This type of testing is not only accurate, but it can collect data at a speedy rate and from there, it will interpret the data on the site.

Dynamic cone penetration test is a simple method for exploration of soil strata. This comprises of cone, driving rods, driving head and hammer. It manually lifts its weight and drops into a cone that will then penetrate into the ground. It will record the number of mm per hit as well as gather an estimate of different soil properties. It only estimates certain properties unlike CPT. But it has an added advantage over SPT in that making a borehole is avoided.

The Pressuremeter test is an in-situ testing method which is employed to get a measure of the stress strain relationship of soil which provides parameters like the elastic modulus. It consists of two parts: the read out unit which rests on the ground surface and the other is the probe inserted into the borehole. This test is performed by applying pressure to the side walls of a borehole and the deformation is observed. The load deformation diagram and the soil characteristics can be obtained by the measurement of the applied pressure and change in volume.

Three main types of Pressuremeter are:

The flat plate dilatometer (DMT) is an in-situ test device which is not as oftenly used as the CPT(cone penetration test).The DMT is a thin blade of 14mm thickness which is exerted into the soil using the same rig that is used to push the cone penetrometer in the CPT test. The DMT test like the CPT, is not suitable for very dense, hard or gravelly soils as they might damage or buckle the blade. There are dual gauges which are used to provide measurements of pressure to lift the membrane and also to expand it. These pressures are employed to estimate the in-situ lateral stress and lateral soil stiffness.

The In-situ vane test is the best suited test for the determination of the shear strength of saturated cohesive soils, especially of the sensitive clays which are very prone to sampling disturbances. It consists of pushing a four-bladed vane in the soil and rotating about the vertical axis. The torque which is required to cause the failure of soil by shear is measured and is used for the assessment of the undrained strength of soil. This is also employed to measure the in-situ clay sensitivity.

Permeability tests are used to obtain the value of the coefficient of permeability of soils in-situ. This test avoids the difficulties involved in obtaining and setting up undisturbed samples in a permeameter. It not only provides the permeability of a small sample of soil but also provides information of the bulk permeability as well.

A field permeability test comprises of pumping out water from a main well and observing the resulting drawdown surface of the original horizontal water table from at least two observation wells. The flow quantity and the levels in the observation wells are noted down when the flow reaches a steady state. Two important field tests for determining permeability are:

Plate load test is a field test which is employed to determine the ultimate bearing capacity of the soils which are not easily sampled and also the probable settlement under a given loading. In this test, a plate is placed on the soil to be tested using sand, cement mortar or Plaster of Paris. The ultimate bearing capacity here is then considered as the load at which the plate starts sinking at a rapid rate.