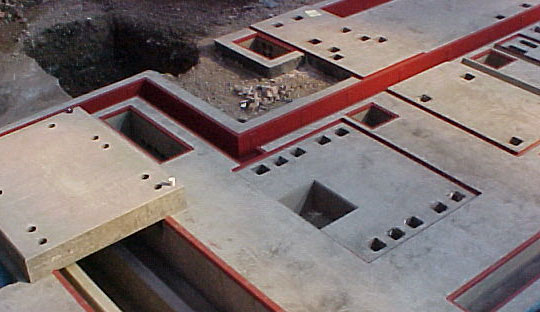 Machine foundations and their vibration analysis

There are two types of vibrations in machine foundation which are as follows:

Unlike free vibrations, Forced vibrations occur with continuous external forces on the system. If F (t) is an exciting force applied to a damped system, its equation of motion can be written as:

To understand and analyze the vibration theory of machine foundation, it is necessary to assume that the machine foundation has single degree of freedom even though it has 6 degree of freedom. Imagine a machine foundation is resting on a soil mass. The mass of this foundation acts downward at the center of gravity if the system and let’s assume it as mf. There also exists a mass of soil which acts upwards and let’s say its ms which is the elastic action of soil due to the vibration of the system. This elastic action is dependent of the stiffness k. The resistance against motion is dependent of damping coefficient c. All these 3 parameters namely mass, stiffness and damping co-efficient are required for the complete analysis of the machine foundation.

Determination of the parameters essential for the analysis

This stiffness parameter depends on the following:

Stiffness is derived from the following methods.

Damping occurs when the vibration energy dissipates from the soil. The major reasons to develop damping are:

The damping constant varies from 0.01 to 0.1 and is obtained from the area of hysteresis loop of load deformation curve as follows:

Where, ΔW =work lost in hysteresis