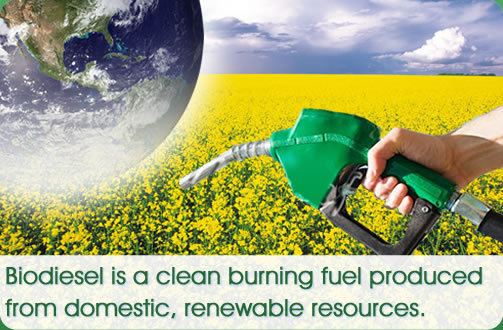 BIO DIESEL A fuel for future

• Investigated as diesel fuels before the energy crisis of the 1970s and early 1980s
• Rudolf diesel: inventor of diesel engine
• French Otto company in 1900 operated a small diesel engine on peanut oil
• Gained little attention due to widespread availability and low cost of petroleum diesel fuel

• Fuel is ignited by hot air; the air is heated by compression
• Ignition should begin as soon as possible.
• If it does not, the entire charge of fuel become thoroughly mixed with air, and when it does ignite, the pressure rise will be much steeper than it would have been had ignition occurred earlier.
• So a desirable property of a diesel fuel is that it ignite quickly.

• It is a reversible reaction
• Pseudo-first-order or second-order kinetics, depending on the molar ratio of alcohol to oil, the reverse reaction is second order.
•For transesterification to give maximum yield, the alcohol should be free of moisture and the FFA content of the oil should be <0.5%.
• Standard parameters for methanol based transesterification are 60°C reaction temperature and 6:1 methanol: oil molar ratio

I.Rapeseed  and  sunflower oils are used in the European Union
II. Palm oil predominates in biodiesel production in tropical countries
III. Soybean oil and animal fats is the major feed stocks in the United States

•  Bio-diesel blending in Diesel improves most of the Fuel properties
•  Mass emissions of carbon monoxide and particulates found lower with Biodiesel blends, but NOx increased
•  Due to low energy content, high fuel consumption
•  Its Price is higher, hence not in practiced