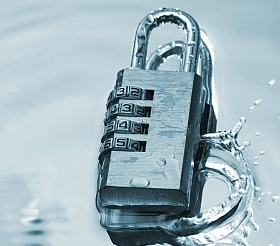 Today, nearly 1 billion people in the developing world don’t have access of potable drinking water. Clean, safe drinking water is scarce. It is the foundation of life, a basic human need. Eight districts of the Marathwada region in Maharashtra has last connection in 2007!! (jalna)

” SO CONSERVATION STARTS FROM OUR OWN HOUSES THAT’S WHAT SENSITIVE PLUMBING IS FOR !!”

Saves 33% of water when we use the small flush button. A typical WC is flushed 5 times a day with 4 small flushes and 1 full flush: 4 x 4litre small flush, 1 x 6 litre full flush= 22 litres of water a day with an average flush of 4.4 litres. Good when used commercially as used repeatedly for large no. of times.Special single flush WC and cistern combination that only needs 4.5 litres of water to flush. SAVES 25% of water v/s 6 litre only flush. Good for areas of high usage with different users such as airports, railway stations, public places, etc.

Cistern only begins to fill with water once the flush is complete. The ultimate water saving device. Guarantees maximum water saving even in high pressure situations. A composting toilet is a dry toilet that uses a predominantly AEROBIC PROCESSING SYSTEM that treats excreta, typically with no water or small volumes of flush water, via composting or managed aerobic decomposition(IN SWEDEN)

Bath designed with a larger area at the base to give space for an overhead shower.Showering is an effective way of saving water . A shower bath gives you a choice of showering or bathing where space is limited. Showering is an effective way of saving water as compared bathing with bucket. A person uses 40 lt. of water for bathing which is 30% of LPCD and amount of water used by shower depends upon type of shower ,pressure and time period the shower taken.

Resistance is felt in lever when the tap is delivering half the potential water flow. When lever ‘clicks’ tap delivers 100% flow. Cuts water usage by 50% if lever is stopped before click.

Self closing taps can be set to run for a pre-determined amount of time typically 10 to 15 seconds. This is carried out at installation. This means taps are not left on by accident as well as ensuring washroom are not flooded. Ideal for schools and high uses areas such as airports.When used commercially;

Integral sensor shuts off after 3 seconds from when hand is removed. Spouts with integral sensors detect hands within the sensing range and the solenoid valve is opened. The valve remains open for 3 seconds after the removal of hands and up to a maximum of 30 seconds if a hand or object is continuously detected.

Infrared sensor detects user and operates Water delivered only when it is needed. Fittings can be stand alone or be part of an integrated washroom system controlled by one unit. Water delivered only when it is needed. Spouts with remote sensors operate differently. When hands are detected within close proximity of the sensor, the solenoid valve opens and water is delivered for a maximum of 30 seconds. The solenoid valve can be closed within this period by a second activation of the sensor.

Aridian urinal uses a filter that breaks downuric acids and acts as a trap. The system requires no water. Sensor flow urinal. Sensorflow Urinal systems are only activated when the sensor detects use. Reduces the amount of times the flush is activated and can offer huge water savings

Instead of WC ,WATER EFFICIENT URINALS should be used at PUBLIC PLACES like Hospitals ,Airports ,Railway Station , etc. 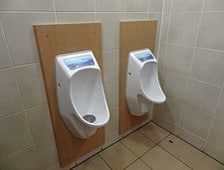 urinals that use no water at all, first invented by a German named Klaus Reichardt. Use a trap insert filled with a sealant liquid instead of water. The lighter-than-water sealant floats on top of the urine collected in the U-bend, preventing odours from being released into the air. the cartridge and sealant must be periodically replaced. the system saves anywhere between 15,000 and 45,000 gallons (approx. 55,000 and 170,000 litres) of water per urinal per year.