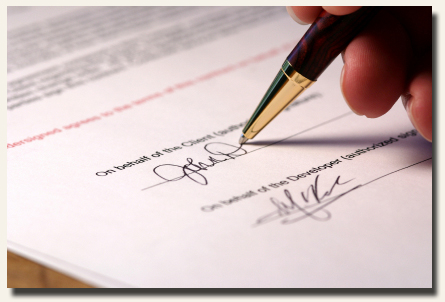 The Nature Of Contracts

All construction is done within a contract except that done by a person for himself. A contract determines the actions of the parties in their dealings with each other. The parties to a contract are bound to each other for a certain period of time by a unique and exclusive relationship (privity of contract) they have created for their mutual benefit, which gives them both obligations which they have agreed to accept so that both may benefit. This contractual relationship persists until the contract is discharged or terminated (because of impossibility, agreement, bankruptcy, or breach of contract).

•Mutual agreement is the fundamental and mutual consent which is normally expressed by the parties to a contract in the offer originally made by one, which then is accepted by other.•Sometimes the acceptance of an offer may be unspoken and indicated or accepted by an action, rather than by actual words.•A contract may be defined as a promise enforceable by law, and there must be genuine intention on the parties to take on obligations agreed in the contract.Although contracts are legislated, there are large areas of contractual dealing relatively free from judicial and governmental control in democratic countries

•When a contract is breached, the party not guilty of the breach is relieved by law from his duties arising out of contract, and he may seek a remedy for the breach at law.
•The law provides two common remedies:–Damages to be paid in money to the hurt party by the party in breach of contract–Specific performance of the contract by a court order.In construction contracts money damages are much more common than specific performance

Role Of The Designer

•International construction documents are also often based on industry-prepared standard forms.
•A number of organizations prepare recommended standard general conditions and associated forms. Such as:–ENAA (Engineering Advancement Association of Japan)
–FIDIC (International Federation of Consulting Engineers)–ICE (Institute of Civil Engineers, United Kingdom)–JCT (Joint Contracts Tribunal)
•The object of a contract must be lawful, for the law will not enforce a contract for an illicit purpose.•It is more probable to see illegal work done under a contract’s change order, because changes are not always subjected to the same official scrutiny as the work originally proposed and shown in the contract documents, and it is possible that a change could be made to do construction work that would be illegal (e.g. increase room’s seating capacity beyond its legal limit).