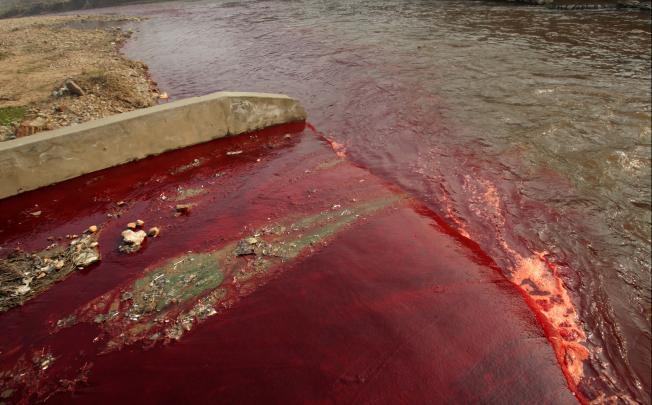 A  dye  can  generally  be  described  as  a  colored  substance  that  has  an  affinity  to  the substrate to which it is being applied. The dye is generally applied in an aqueous solution, and may require a mordant to improve the fastness of the dye on the fiber

Both dyes and pigments appear to be colored because they absorb some wavelengths of light preferentially.  In contrast with a dye, a pigment generally  is  insoluble, and has no affinity  for  the  substrate.

Chromophore: it is a functional  groups  which  are  unsaturated and  they  cause  a  compound  to become  coloured.

In the case of  textile  dyeing  operations,  the  concerns  raised  can  arise  from  incomplete  dye  bath  exhaustion  and  the  presence  of  dyeing  auxiliaries  and  metal  ions  that  are  toxic  to  aquatic  life.

Activated carbon adsorption has been widely studied as a waste treatment method for the removal of different  classes of dyes  from wastewater.

Factors  such  as  the  choice  of  activated  carbon, temperature, pH, contact time, and dosage must be taken into consideration for optimum removal  of  dyes  from

The most commonly used method of dye removal by adsorption. It can be  Effective for adsorbing cationic, mordant  and  acid  dyes and reactive dyes

Performance  depends  on  the  type  of  carbon  used  and  the  characteristics  of the wastewater.

Surface-active material,  which  may  be  ionic,  molecular,  colloidal,  or  macroparticulate  in  nature,  is selectively  adsorbed  at  the  surface of  bubbles  rising  through  the  liquid.

Fenton’s  reagent  (Fe2/H2O2)  has  been  used  commercially  to  oxidize  and  decolorize effluents containing a number of azo, anthraquinone, and reactive dyes.

Dyes removed in these studies include reactive azo and anthraquinone dyes.

The  cationic  dye  Rhodamine  B,  Basic  Violet  10  and  the  anthraquinone  mordant  dye Alizarine Red  (Mordant Red 3)  can  be decomposed  by Ti02  in  the presence of  visible light. Degradation occurs via the interaction of dye with hydroxyl radicals (OH.). Two of the final degradation products are phthalic acid and carbon dioxide.

These  methods  are  currently  used  by  the  textile  and  dyestuff  industries  to  decolorize waste water using enzymes.

In  this  regard, enzymes  such as  laccases,  lignin peroxidases, and manganese peroxidases have proved  effective  in  cleaving  aromatic  rings

One of the most serious environmental problems in the dye, textile, and leather industries is  associated with  the manufacture  and  use  of metallized  azo  dyes  that  are  complexed with chromium or cobalt to obtain desirable fastness properties

various  chemical, physical,  and  biological methods,  such  treatments  can  be  expensive  and may  result  in sludges that must be disposed by  incineration or  land  filling

In view of an emphasis on pollution prevention  instead of waste  treatment,  the merits of  substituting  iron  (Fe)  for chromium (Cr) and cobalt (Co) in a group of commercially important acid dyes.

The  ionic  components  (heavy metals) are  separated  through  the  use  of semi-permeable  ion­selective membranes.

Because  of  the  alternate  spacing  of cation  and  anion  permeable membranes, cells of concentrated and dilute salts are formed

Utilization of membrane filtration results in the retention of active micro-organisms, extra cellular  enzymes  generated  by  these  micro-organisms  for  degradation  of  the  organics present  in  the effluent

Some  micro-organisms,  especially nitrifiers, are slowly growing one, their loss shall reduce the efficiency of the treatment  system  and  nutrient  removal

In  the MBR, these  organisms  are  retained  and  a  better  treatment  is  achieved

Maintenance  of  higher  concentration  of  these  enzymes  shall  result  in  rapid  and  better  degradation of complex organic molecules present  in  the  textile waste water.