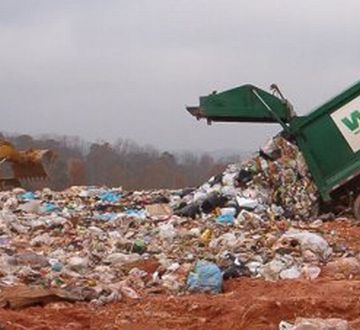 Any material which is not needed by the owner, producer or processor.

Rs 1600 crore for treatment & disposal of these wastes

In addition to this industries discharge about 150 million tonnes of high volume low hazard waste every year, which is mostly dumped on open low lying land areas.

Growth of Solid Waste In India

Waste is growing by leaps & bounds

During the same period, municipal solid waste has grown from 3200 tonnes to 5355 tonne, an increase of 67%

Waste collection is very low for all Indian cities

City like Bangalore produces 2000 tonnes of waste per annum, the ever increasing waste has put pressure on hygienic condition of the city

Primarily by the city municipality

-Dumps these wastes to the city outskirts

How solid waste affected us in recent years

Cloudburst in Mumbai (2005) clogged the sewage line due to large no. of plastic bags

Blast in the Bhusan Steel factory at Noida, caused due to imported scrap from Iran

Stray animals dying on streets and farmland due to consumption of plastic bags, which blocks the food movement in their stomach

Most attractive option for them- to dump into developing countries

25,000 tonnes of flyash came back to Philadelphia’s garbage dump

Recycling: Processing of a waste item into usable forms.

-Making money out of waste

-Save energy that would have gone into waste handling & product manufacture

-When Al is resmelted- considerable saving in cost

Recycling not a solution to all problems!

For many items recycling technologies are unavailable or unsafe

In some cases, cost of recycling is too high.

Exchanging output that are considered waste

Waste of one could be input or raw material for others

System was not designed to be so

The system of exchange evolved in 10 years

Problems in Dealing With Solid Waste

Indian scrapyard of Alang (Bhavnagar district, Gujarat) , a place where environmental regulations are lax and workers’ rights are practically nonexistant

In most shipbreaking nations proper waste management is absent. There are no rules and regulations.  And where rules exist, they’re unlikely to be enforced.